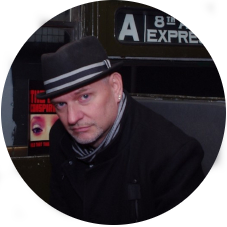 ‘Radio Warfare with Tim Livingston’ is a one hour show of powerful garage rock, punk, power pop, and shakin’ straight up rock & roll, offered each week, exclusively, on Voodoo Radio!

With over 40 years experience in the music scene, the All Music Guide calls host Tim Livingston “…a pioneering figure on the punk scene in New York State’s Hudson Valley”. The Times Union calls him an “Albany rock legend.”

Livingston was the founding member of one of Albany NY’s first punk band, the Morons (1979-1982) and he most recently fronts the critically acclaimed rock band The Last Conspirators.

As if that’s not enough he was, for 20 years, the General Manager for internationally renowned reissue record label ‘Sundazed Music’.

Tim has been both a radio and club DJ and, on one occasion, as part of a fund raiser, broadcast live on air for 48 straight hours! He now resides in SW Florida, where he beams his show across the globe via Voodoo Radio!