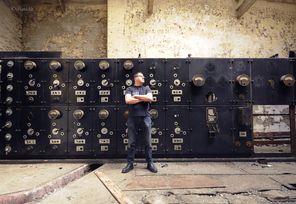 I arrived in Manchester in 1989 with a pocketful of dreams; one was to introduce the city to Industrial / EBM music as few seemed to know about it!
I came up with the title Rubberclad Battlefied! It seemed appropriate because I had read about nights like Torture Garden and I could see how fitting it would be alongside the militaristic / post apocalyptic image of EBM.
I started out in pubs; The Eagle Hulme, the Boatman’s home, Castlefield, a few illegal flat parties in the notorious Hulme Crescents and then I decided to record a live mix to showcase the largely unknown bands like Skinny Puppy, Nitzer Ebb and Front 242.
The tapes with all my own artwork were distributed and well received.
A chance meeting landed me the upstairs room at the Banshee club for Exit 80’s, this was a turning point for the scene. Up until then I was seen as ‘That quiet lad who dressed like a soldier and listened to that Violent music’ but once Nine Inch Nails appeared, things would never be the same. As a result, some of the small crowd attending would go on to do great things like Underworld and Infest – which I have played at twice now with humbling reviews.
I came away from the scene due to a long term relationship but soon returned to find it all a bit different. Using my past experience I landed guest slots at Sin City, Analogue Trash, Club Lash and in time would co-create Black Planet – a regular night at Legends.
But – like most great venues in Manchester, resale and demolition removed them from the map.
Undeterred, I have tried to keep my hand in to get slots at similar nights and the odd side project like Witch House and Experimental.
I now have a residency at Ara; a Goth / Industrial / Alt. 80.s night in a church where I continue to entertain with material from the early pioneering days of the Industrial / EBM genre to more current bands.
My most recent residency is Delete Yourself; it’s primarily Dark Techno and Hard Dance but my Darker Industrial / Early EBM fits right in.
My day job is installing and repairing sound systems, DJ equipment and lighting.


I have collated and condensed information on my career as a DJ from the start in 1989 to the current day.