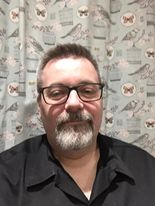 I’m Carl and my rock and roll journey began in the mid ‘80’s, when a school pal lent me killers by Iron Maiden on tape, and I never looked back. I quickly moved on to thrash metal and death metal.

In about ‘92/’93 I started going to “Jilly’s” in Manchester and quickly became a regular, very rarely missing the legendary all-nighters on Friday. It was here that I kind of fell into DJing.

I was asked to help out when “Rockage UK” started their tenure at the club. Initially I was playing bits and bobs of thrash for them in the classic rock and metal room, this turned into doing the full night in the back room on Fridays and alternate Saturdays downstairs.

I joined “Rockage” and over the next few years we successfully set about putting rock nights on at mainstream clubs across the northwest, including Stockport, Sheffield, Bolton and Stoke-On-Trent.

Due to work commitments all round, “Rockage” wound up, and after a brief hiatus I took on the classic rock room at “Rock Kitchen” in Manchester. I stayed here for a couple of years before taking a break from DJing again.

“Back From Hell” came next, with a shift in the scope of music I was playing. Playing nu-metal, pop punk, metal, thrash, goth, punk, industrial, grunge, pretty much everything but traditional classic rock.